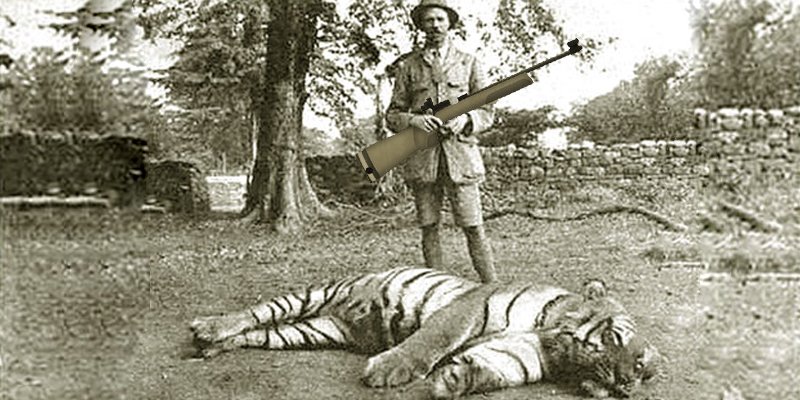 James Edward “Jim” Corbett CIE VD (25 July 1875  – 19 April 1955) was an British-Indian hunter and tracker-turned-conservationist, author and naturalist, famous for hunting a large number of man-eating tigers and leopards in India.

Corbett held the rank of colonel in the British Indian Army and was frequently called upon by the government of the United Provinces, now the Indian states of Uttar Pradesh and Uttarakhand, to kill man-eating tigers and leopards that were preying on people in the nearby villages of the Garhwal and Kumaon regions.

Corbett was an avid photographer and after his retirement authored ‘Man-Eaters of Kumaon’, ‘Jungle Lore’ and other books recounting his hunts and experiences, which enjoyed critical acclaim and commercial success.

Corbett was born of Irish ancestry in the town of Nainital in the Kumaon region of the Himalaya (now in the Indian state of Uttarakhand). He grew up in a large family of 16 children and was the eighth child of William Christopher and Mary Jane Corbett. His parents had moved to Nainital in 1862, after Christopher Corbett had been appointed the town’s postmaster. In winters, the family used to move to the foothills, where they owned a cottage named ‘Arundel’ in Chhoti Haldwani or “Corbett’s Village”, now known as ‘Kaladhungi’

During his life Corbett tracked and shot a number of leopards and tigers, though only about a dozen were actually well documented man-eaters. It is claimed that these big cats had killed more than 1,200 men, women and children. The first tiger he killed, the Champawat Tiger in Champawat, was responsible for 436 documented deaths.

Analysis of carcasses, skulls and preserved remains show that most of the man-eaters were suffering from disease or wounds, such as porcupine quills embedded deep in the skin or gunshot wounds that had not healed. In the author’s note of the book ‘Man Eaters of Kumaon’, Corbett writes:

‘’The wound that has caused a particular tiger to take to man-eating might be the result of a carelessly fired shot and failure to follow up and recover the wounded animal, or be the result of the tiger having lost his temper while killing a porcupine’’

Corbett preferred to hunt alone and on foot when pursuing dangerous game. He often hunted with Robin, a small dog he wrote about in Man-Eaters of Kumaon.